Dark Alley Paranormal has investigated TALA many times but this was the first investigation for the Northern Kentucky Chapter and it did not disappoint. Our evening was filled with many personal experiences. We captured numerous evps and one very interesting photograph – taken outside on a “stage” area before our official investigation even began.

Looking to the right on the stage you will see a shadow figure blocking out the trees. 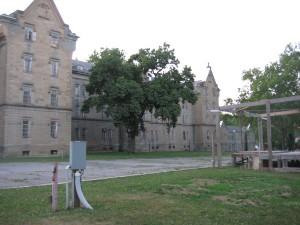 With a history dating back to before 1886, there were many stories waiting to unfold for us at our investigation at Vernon Lanes. From the moment we began our investigation we picked up numerous EVPs (Electronic Voice Phenomenon). A ladies restroom with a body-less voice taunting us. An old mansion with history hidden in it’s walls beckoned us with an EVP of a wailing man and a whisper of a woman commenting on our conversation. There was never a dull moment and we ended our overnight investigation with over 20 clear EVPS and many more whispers that we could not attribute to anyone in our group.

We look forward to investigating the Vernon further in the near future. 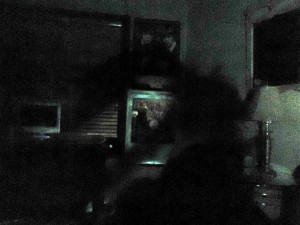 Reports over a span of 15+ years at an attorney’s office, once a personal residence in a Victorian home almost 100 years old. We were asked to come in and investigate these reports, one of which included the reporting of seeing a transparent figure of an older woman, hair up in a bun in an old Victorian style dress. Before we started our investigation we clicked several pictures just to get an idea of the rooms, one of which the “Red Room”, being reported as one of the more active rooms of the building. This is where we captured the image below. Several pictures had been taken of this room in the same angle, there were no dark shadows in the room and the corners were easily visible except for this one particular picture where it appears to us as an older woman’s profile of her upper torso and face, the corners of the room seem completely blackened out with a shadow. 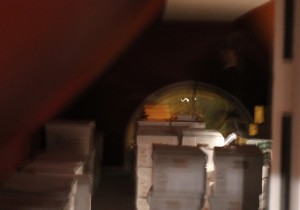 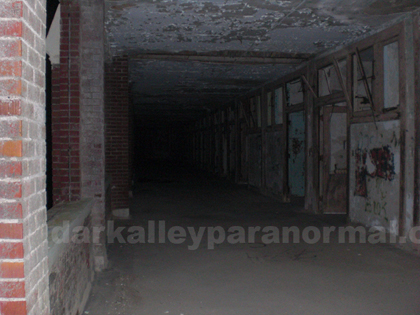